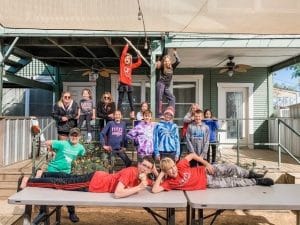 Woah! Nitro had a great start to championship season finishing first overall at B Champs with a total of 2342.5 points. Nitro brought home 20 gold medals and dozens of silver and bronze medals and had a top-five finisher is nearly every event swam. Some of the biggest improvements of the meet included Oliver Ward and George Adamopoulos, both dropping over 20 seconds in their 500 Free. Nathan Lowe swam a perfect 200 Breast dropping 10 seconds and finishing first with a 2:44.16. Reetu Jitta crushed her 200 IM really racing home the 50 Free. Zach Marshall had strong pullouts throughout his 200 Breast dropping over three seconds. Pratik Gurijala was incredibly focused and dedicated throughout the meet. In the Boys 11-12 100 Free, Nitro took gold, silver, and bronze! Eli Sefcik and Derek Wei, after motivating each other and high-fiving each other behind the block, went head-to-head in the 200 Free where they pushed each other through the whole race and both dropped tons of time. Over 50 BB times were achieved and even more personal bests. Mako Miyashita was high-point scorer for the girls with 78 points, and Sean Goodman for the boys with 131.5 points.

For many kids, this was their very first championship meet, so nerve were high. The athletes did a phenomenal job cheering for one another; there was good sportsmanship and camaraderie amongst all of athletes and families. Luke Wood and Libby Gunn both lead with their incredible positivity for themselves and their teammates. Parents were phenomenal in supporting their kids as well as their team; Nitro parents—as usual—stepped up volunteering to time at every single session.

Your coaches couldn’t be more proud of all the hard work y’all put in this season to get to B Champs! Keep it up! —Coach Raven, Coach Hannah, Coach Felix, and Coach Paige