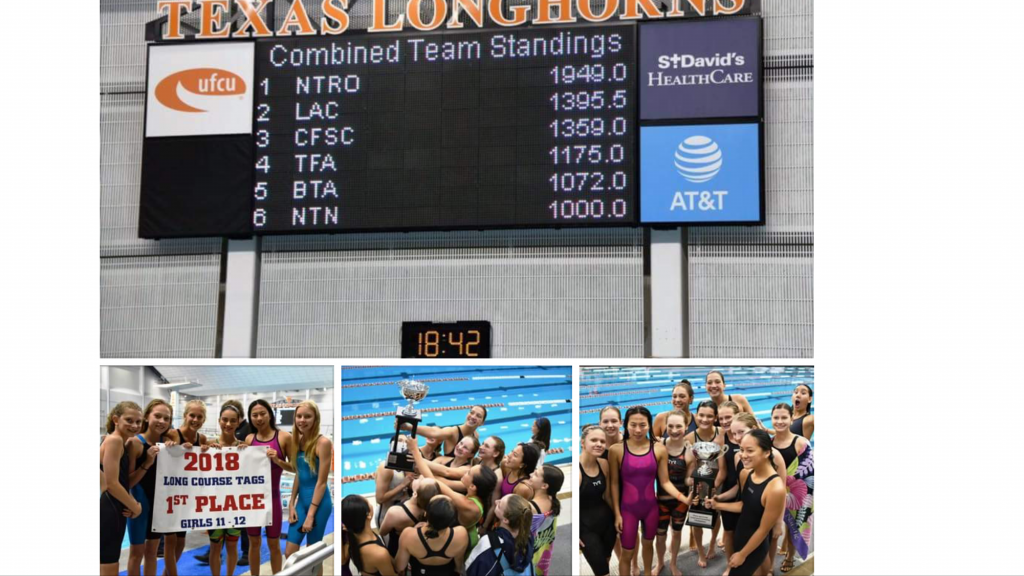 Here’s the final day’s recap of the TAGS meet. And what a meet it was!!

Nitro grabbed the lead on Thursday night, day #2, and never looked back.

63 teams scored points, many more were represented, and when the last race finished, the final score looked like this for the top 10 teams in Texas:

I want to pass along several Thank You’s.

First off, Thank you to the Nitro Parents and Nitro Families who do so much of the preparation work — the driving, the meals, the sleep management, the behind the scenes work you all do day after day, season after season, year after year making it all happen. You all sacrifice so much and put so much love into your kids. It is awesome. Thank You.

Thank you to the Nitro athletes who put it all on the line once again – every race. Their attitudes are contagious, and having the privilege of being on that pool deck for several of the sessions was pure joy. When things went great, lots of high 5s and smiles. When things didn’t go so hot, still lots of high 5’s and support for each other.

Thank you to the Nitro Families and Athletes who came down on their own to cheer our team on and lend us some extra support!

Thank you to our Nitro Parents who helped officiate the meet – those are some LONG hours to be on your feet on a pool deck session after session. I saw the following families represented among the ranks of the USA Swimming Officials: Digby, Helm, Worley, Singletary, Freeman. I’m sure I’m missing a few others, so if I forgot someone, let me know! Thank you for sacrificing so much of your time for the kids and the teams.

Thank you to anyone who came down and helped time during the meet. Special shout out to Jana Pena and her daughter Olivia – who were there timing EVERY FINALS SESSION. Wow!!

Lastly, Thank You to the Coaches. I don’t say this often enough, but I’d put our Coaches up against any staff in the country in the areas of caring, professionalism, positivity, guidance counselor abilities, motivational speakers, managing the ups and downs of a long meet, and keeping what’s important in the forefront. Thank You to all of the Nitro Coaches for all they do all year long.

At this particular meet, the main Coaches were Allison, Adam, Alex, Daniel, Felix, Jeremy, and Randy. Coach Flo was there for most of the Finals sessions if not all of them, and Coach Lindsay came down to add some support as did Coach Peter. Thank You!

Also – Coach Jonny could be seen up in the stands videoing every race from Friday finals, Saturday finals, and Sunday finals. They will all be accessible through our YouTube channel shortly. Thank You! – Coach Mike